Crop production is highly influenced by the sensitivity of crops to variations in climate and can have major implications for food supply. The effects of climate change are increasing, where extreme rainfall events have become more frequent and variable. On the other hand, there has also been an increase in the severity and frequency of droughts. This unpredictability and uneven distribution of rainfall and rising temperatures impact adversely on the small farm produces. Thus, developing measures to safeguard crop productions against these stresses is a critical aspect of climate change adaptation.

Ratna Adiwasi, belonging to a family of small farmers that for generations has been growing Black Gram and Wheat trusting on the monsoon rains. Like him, few other smallholders in this semi-arid region has started shifting towards growing millet and gradually freeing themselves from the vagaries of weather. Due to prolonged dry spell and sudden heavy rainfall, smallholder like him are forced to leave irrigation intensive crops to protect their crop damage.

This year, concurrent rain in Madhya Pradesh has created havoc in the operational areas of SAFBIN (i.e. Sagar and Vidisha districts). The rain continued for more than 15 days concurrently and lash off the entire agricultural farms of smallholders. The average rainfall was more than 2500mm in that week which was much higher than the average rainfall (i.e. 1197.6mm) of Sagar. This was the highest estimated rainfall in 43 years. Most of the smallholders lost their major crops due to this uncertain heavy rainfall leaving behind their life to a standstill. 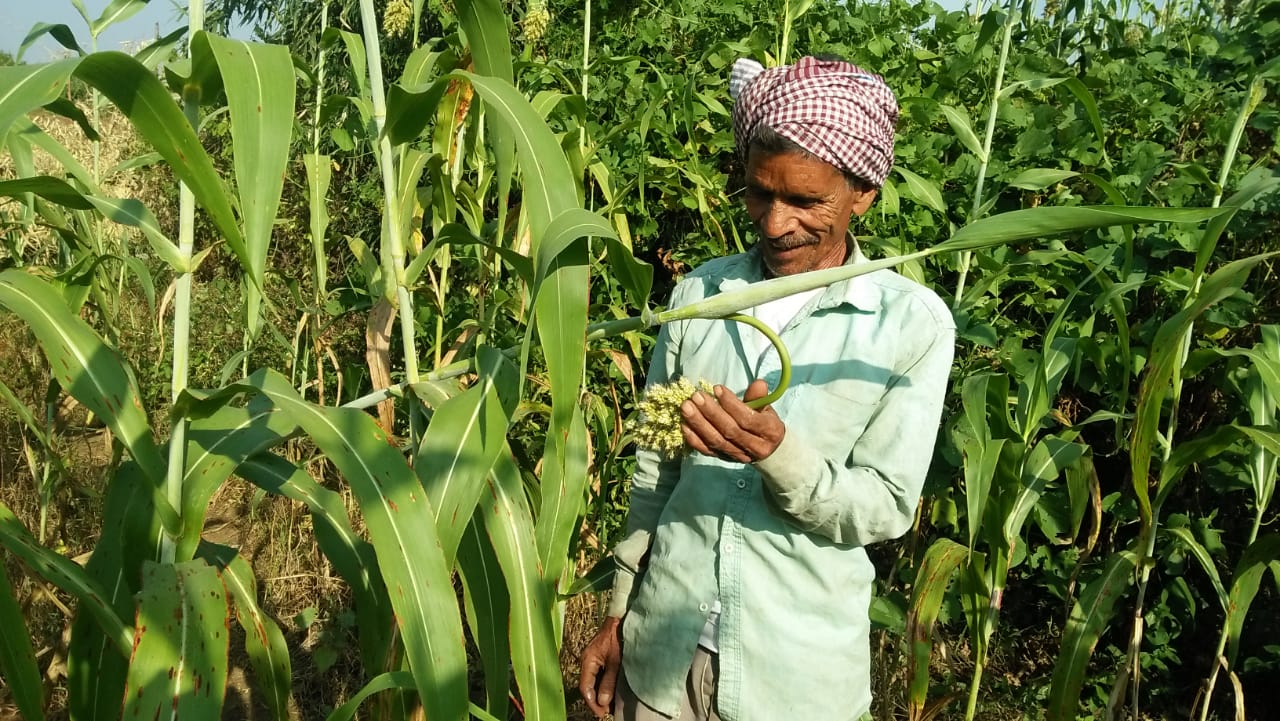 Ratna couldn’t think beyond his regular crops which left us at the mercy of either uncertain rains or drought. This scenario enables SAFBIN as a solution for him. While oriented on the integrated farming system approach, he decided to take (Jowar) Millet as an alternative crop along with Black Gram cultivation. Cultivating Jowar in his 1.5 acres land, Ratna proudly expecting a good harvest now between 14-16 quintals. Millet, a crop that can grow in areas with less than 350mm of rainfall and the cultivation cycle completed within 70-100 days has resulted in farmers even in dry regions of Sagar, Madhya Pradesh witnessing the revival of millets.

“I have never had a situation where all our crops have failed due to such heavy rain, it was never expected. Thanks to SAFBIN for bringing back our old days by reintroducing Jowar millet, something or other will grow in variable climatic conditions to secure our food requirement. Ratna says delightedly…

Millets are rich source of nutrition and it helps to address the issues of hunger and malnutrition. Millets constitute one of the oldest forms of source of food and require less water, even grows in less fertile soil, high temperature, erratic soil condition and ability to withstand even in heavy rainfall.

Giving major focus on sustainable local food production through the integrated farming system (IFS) to ensure Farm production, Income & Nutrition by making small farms more resilient with ownership and control over farm resources, SAFBIN promotes smallholders to diversify their farm production and income for adaptation to climate change. SAFBIN in line with SDG-2, working with a vision of reintroducing millet-based multi-cropping systems and are committed to bringing about local food & nutritional security to the small and marginal farmers in rain-fed areas.