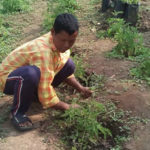 Cotton Ch Momin visited several Govt. hospitals in East Garo Hills in Meghalaya and traditional practitioners to find relief for his ailing wife from severe allergy with high fever but could not succeed. Affording private hospital and treatment outside the state was beyond his capacity.

After being hassled and failed, he decided to treat his wife by giving home-made traditional medicines prepared from herbs and extracts. The results were slow but encouraging and within few months she recovered completely.

Initially, he was known to very few people in his village as he did not want many people to have known him as a traditional practitioner. But after the leadership training of awareness programmes of Farm Northeast-II, his mindset changed.

Apart from being a traditional practitioner and a farmer he has taken a loan from fisheries department and started fishery in a small pond. Though the return is less it adds to his profit. He motivates other farmers to take up fishery and earn their livelihood through various means.

“I do not charge for the treatment but when someone gives me forcibly, I had to respect their feeling”, says Momin. Traditional healing has become one of the sources of his livelihood. He expressed his gratefulness to the FARM Northeast-II programme for changing his thinking and knowledge to boost his confidence. He is more than happy to share his knowledge with others who is willing to learn. 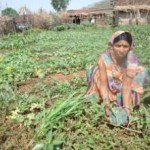 Ganga Barela, of village Sankota, practices farming on her family land. Earlier, due to high agricultural input cost of chemical fertilisers, her family was finding farming an inefficient vocation, thereby retracting from it. She brought the issues to the Jeevika programme team in her village, who with timely handholding, counselling and capacity building enabled her to take up vegetable-cultivation with cost effective agriculture practices. With a series of motivational discussions and required facilitation, Ganga decided to start mixed cropping cultivation and also adopt bio-fertiliser process. She sowed seed of ladies-finger and tomato in her land with support of her spouse and took good care of the field. Her hard work resulted in a handsome produce, which brings an additional income of rupees five hundred to her family. The amount varies from time to time and this has inspired other women members of the Self Help Group to resort to mixed cropping through Bio- fertilisation.

As an expansion of the initiative, Jeevika Haat, weekly market is organised on Fridays whereby the people from twenty five villages gather to sell and purchase goods. Jeevika Haat is a response to the difficulties faced by people in transportation to reach the nearest market place in Tiwni village in Umariya district. The process took almost a year, and now people have come up with around twenty shops connected with twenty five villages at a common nearby location, earning an average income of rupees two thousand a month. 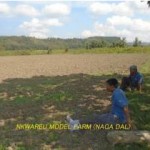 The Nagas, both men and women farmers from the Peren district of Nagaland came together to cultivate a popular variety of pulse called Naga Dal. They practiced cultivation of Naga Dal in a selected plot near the village. The result was an astounding yield of 640 kilograms of Naga Dal on the 3 acres of land. The produce is sold in the market for Rs 80-90 per kilogram and the proceeds are shared between the members. This initiative has motivated the people to widen such collective cultivation.

To read motivational stories of change and empowerment visit our exclusive blogon the project at:
http://backtofarms.blogspot.in/.

Beginning of a Change in the Naga Valleys 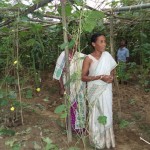 Ms. Runu Murmu, a woman farmer from the Jorhat district of Assam took to organic agriculture after receiving training from the facilitating partner organisation. She inspired other women in the village to practice organic agriculture, and formed a group of women farmers. This group is practicing collective as well as individual cultivation.

Ms. Runu Murmu, (35) has emerged as one of the women farmer leaders in Panjan village of Titabor Block under Jorhat district of Assam. Her husband, a private school teacher is the sole bread earner of the family. With four children, two sons and two daughters, Runu’s early married life was confined to household chores with small kitchen gardening. In the initial stage of her kitchen gardening in a small piece of land of about a bigha, she used chemical fertilizer and pesticide expansively to yield high and rapid produce for the family’s consumption.

However, after attending farmers’ club meetings and a number of training programmes organized by Seva Kendra Dibrugarh (SKD) her interest in organic farming, integrated pest management and traditional knowledge increased. This knowledge enabled her to start farming on wider scale to earn additional income with which she could enrol her children in formal schooling. Runu discontinued using chemicals and pesticides in her garden since 2014, and instead switched to using compost and manure. She planted seasonal vegetables like jika, cucumber, ladies finger, ginger, rice gourd, bitter gourd, beans, pumpkin etc., while also practicing multiple and seasonal cropping. Through information provided in the trainings, Runu has networked with the local shopkeepers to sells off her surplus produce at a wholesale price and earns about INR. 10,000 per month. Promising agricultural production has motivated her to add another plot of land to her existing cultivable land. Today, she stands an inspiration to many women and men farmers in her village.

“Organic products saistho karone bhaal aru income barhe, aamak aji aidor e keti kora ussith-saistho aru poribhekh karone,”(meaning that the organic products are good for health, environment and income, and should be the way in which agriculture should be practiced) says Runu.

The novel Coronavirus pandemic has affected the rich and poor, but it’s the po... View More Campaign