The major portion of Andhra Pradesh state is surrounded by the river Godavari and Bay of Bengal Sea. The rains at the upper region will cause floods in the state frequently. East and West Godavari districts which are severely affected by the heavy downpour during July to September 2019 monsoon which triggered the floods, lead the destruction is such as death tolls, house destruction, and crop damage and loss of livelihood to the  Weaker communities such as women, Socially backward, migrant rural labourers and fishing communities. Results show that most impact occurred near the coastal and in agency areas .  Poverty and social ordering puts on the risk in the face of the heavy floods. As per sources a total of 38749 people was affected by the floods in river Godavari, and 17,632 were shifted to relief camps from the 45villages of Eight mandals in East and West Godavari districts. The effected region of tribal and coastal area lies below the Polavaram dam which also said to be a cause for submerging of the villages. 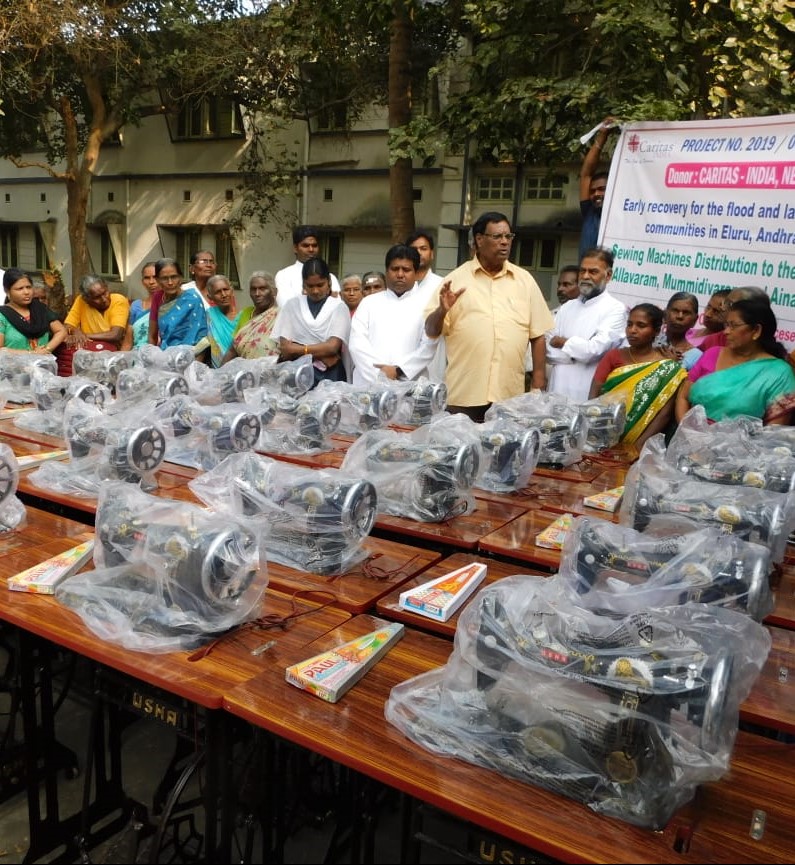 In this situation, Apart from the  state Govt support,  the Caritas India  supported through an  “Early recovery for the flood and landslide  to  the affected communities”project through the  Social Service Centre, Diocese of Eluru, AP  with a budget of 20.00 lakhs for  duration of 3 months: (starting from 10th November 2019 – 10th February2020)   to a total of 230 Beneficiaries from 6 villages of five mandals for off farm livelihood support (193 nos ) and  to the repairing  of the houses (37 nos ).   As part of this,  sewing machines were distributed to the 31 women in  4  four villages such as Alavaram, Amalapuram, Inavilli. This support has bought confidence among the communities for future sustainability.