An appraisal of the Bihar Flood 2019 Response was shared by National Dalit Watch (NDW) during the State level consultation on inclusion monitoring of the Dalits, Adivasis and Other marginalized communities organized on January 07, 2020, at Patna, Bihar.  This was a joint programme organized by IAG, Consortium of ADRA India, Caritas India, and Christian Aid. For the programme all the IAG members participated, Mr. BB Giri Chairman Bihar Red Cross was the Chief Guest for the programme was Chaired by Convener IAG.

Majorly after every response, Consortium undergoes an Inclusion monitoring study by National Dalit Watch (NDW) to understand the issue from the community and discuss the collaborative mechanisms for addressing gaps in linking excluded communities through government response and also through humanitarian response by NGOs in the future emergency responses. 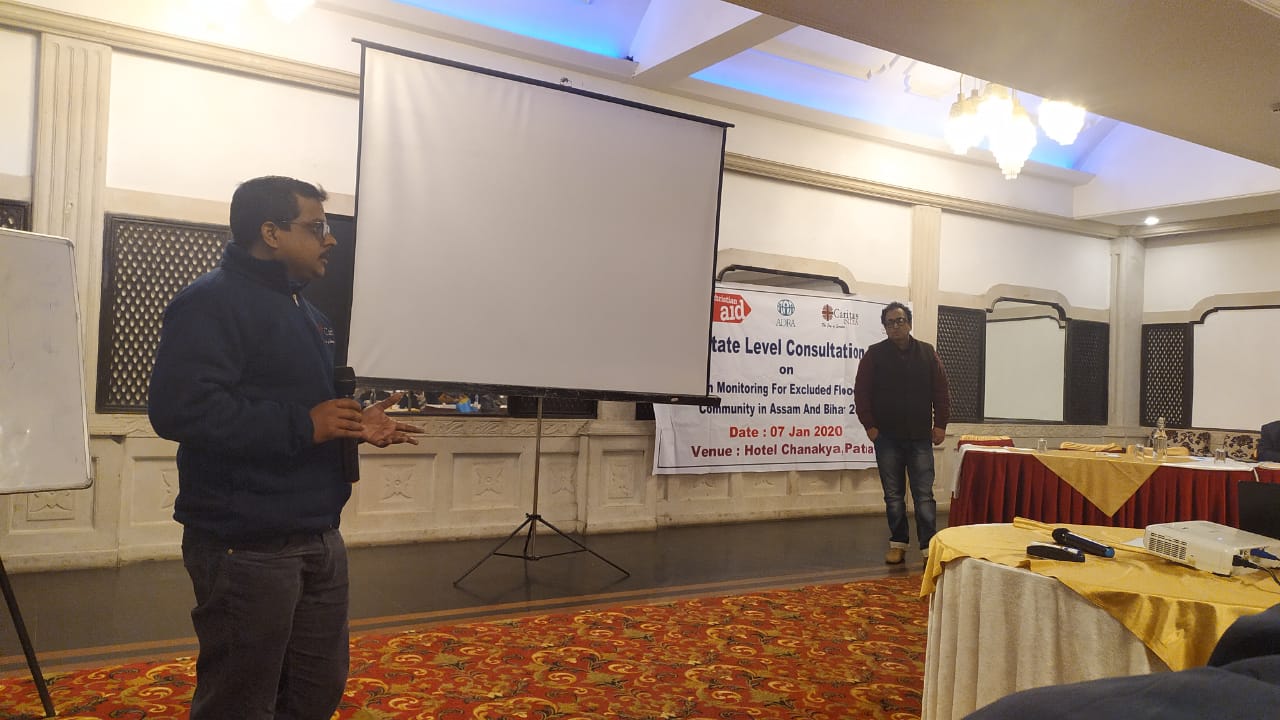 Caritas India also presented its Emergency Response activities of Bihar flood 2019 by supporting 2600 families with Water, Sanitation, and Hygiene (WaSH) promotion and WaSH kit distribution in Sitamarhi in the month of August 2019 supported by HCL Foundation. Another 3000 families were supported for shelter assistance through the Emergency Appeal fund by Caritas India

In October – November 2019 Caritas India conducted the emergency response activities in Patna Slums and covered 2200 families in 14 most affected slums.

From July 2019 ECHO supported Emergency Response activities in Bihar and Assam was led by Consortium of ADRA India, Caritas India, and Christian Aid. The consortium aspires to provide high-quality relief intervention focusing on the most vulnerable and socially excluded communities. While conducting the emergency relief services, a large number of the flood-affected families were found to be alienated from accessing the prescribed rescue and relief services of the government.

The inclusion monitoring study was presented by NDW based on the sample families and communities across the General, Muslim, OBC, and SC communities who did not receive the early warning. This includes 100% of those who responded from the Muslim community, 84% OBCs, 79% from the general community, and 78% SCs. Of those who did receive the early warning, predominantly less than 12 hours in advance, the highest was 22% from the SC community followed by 21% from the general community

There was not enough privacy for women and girls in the shelter with respect to sanitation facilities. This included 79% from the General community, 76% of the OBCs, 70% of the SCs, and 67% from the Muslim community.

The study also revealed that menstrual hygiene was neglected in Government relief. Transport facilities were non-existent and only 8% OBCs and 11% SCs received transportation to the shelter. While 67% of OBCs were rescued by mechanical boat, the remaining 33% were rescued by a bamboo raft. For the SCs, 25% of them were transported in mechanical boats and the remaining 75% through manual boats.

All the surveyed Muslims, along with the General category at 75%, OBCs at 50% and SCs at 52% did not have access to drinking water. The study also states that only 67% SCs and 34% OBCs received food during their time at the shelter.